Readers of the Washington Post refuse to see image of a gay couple kissing. 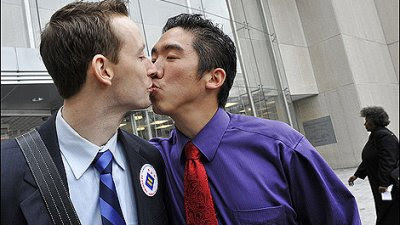 Readers of the Washington Post refused to cross with homosexual sex scenes in the pages of their daily favorite.
The controversy broke out when the newspaper published on the cover, the image of a gay couple to kiss. The idea was to appeal to the legalization of marriage between persons of the same sex in the U.S. capital.

The newspaper admitted it had received complaints of 27 subscribers, one of which threatened to stop reading the newspaper, in the case of "re-appear on the cover of two men to join the lips" ..
New Puritanism again?
Publicado por viswhaaw en 1:57 PM