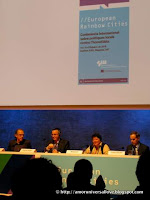 Rainbow Cities is an European conference part of AHEAD (Against Homophobia. European Local Adminstration Devices. Currently being held in Barcelona with the purpose of creating a white paper on LGBT successful practices and public policies to be used a guideline for policy makers  and local governments across the EU.

Some highlights on the first day of the conference would be:

A general tension between EU policies, local initiatives and social realities reflected on a very wide variety of points of view across the the 27 states of the union. eastern and western Europe perspectives and legislation. Being very different culturally and historically  as Roman Kuhar from the University of Ljubljana (Slovenja) revealed on his presentation, Western and Eastern European countries show the whole spectrum of Homonegative attitudes towards LGBT diversity in their societies. 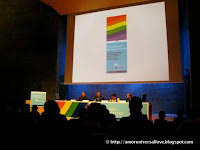 In contrast a very big number of educational, social and civil society initiatives to fight homophobia are taking place in all countries and a network that connects them seem to be a very urgent need to articulate a powerful change in the future of the young generations. The tools seem to be there but the interconnection channel between thm seem to be non-existent.
The Italian network RE.A.DY as presented by Luca Cipriani from the Torino Town hall seem to have no political objections or inconveniences for their activities during any government (left or right winged) a presentation that really generated doubts among participates knowing the current realities widespread in the news about the conservative government and lgbt rights in Italy. 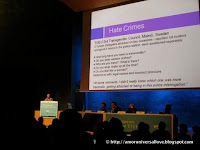 Even when LGBT and the Fight against Homophobia  is generally underfunded in most countries of the union, we could say there is a generalized awareness and a positive trend in the EU for achieving more and better standards for LGBT communities and homophobia eradication. We just hope underfunding is just a temporary situation and not an strategy to keep activists quiet and networks grow as strong as RE:A:DY claims to be to make homophobia a problem of the past. 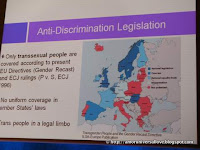 Multidiscrimination and Interseccionality are also on the spotlight of the conference. This approach considers discrimination as being possible from multiple aspects combined with sexual orientation and gender identity as could be religion, origin, social or economic background, etc.

Conclusions are still to be heard and hopefully a very good with the withe paper will be done.